A “bad economic bet”: what will inaction on climate change cost Australia?

As the COP26 summit approaches, Australia and other countries are under pressure to commit to a goal of net zero emissions by 2050. This effort aims to keep global warming at bay. 1.5 ° C and to avoid disastrous impacts for humanity.

One of the major principles of this acceleration? Phase out of coal – the fossil fuel resource Australia currently uses for 80% of its electricity needs.

There is growing pressure from the public here, from other world leaders and even from British royalty, for Australian Prime Minister Scott Morrison (who, as treasurer, notoriously brought a lump of coal to the Parliament), attends the Glasgow summit and commits to goals. But with key figures in the Australian government still resisting net zero, which they see as conflicting with Australia’s dependence on coal, that urgent call appears to go unanswered.

Add to this that Australia is not on track to meet the modest Paris Agreement targets it has already agreed to, and concerns are mounting over the country’s inaction on climate change. But what would this inaction cost Australia environmentally and economically?

According to Professor Richard Holden, professor of economics at UNSW Business School, the implications are major. For example, while Australia might choose to stick with coal as the energy source of choice, moving away from unsustainable technologies globally will leave Australia with financially stranded assets.

“As the world moves away from coal, any country with mining infrastructure will have to move away from it, and Australia is an important country in that regard,” he said.

“It’s important to understand that this is a technological force that is happening. It could happen sooner, it could happen later, but it will happen, and Australia needs to prepare for it. ”

See also: Sustainable investing is on the rise globally. Is Australia being left behind?

Professor Holden points out that moving away from the old technology and embracing the new is by no means unusual in economic history. In fact, there have been “stranded assets” strewn throughout history as economies transitioned with the advent of new ideas.

“Austrian economist Schumpeter called this process creative destruction,” he says. “There is a destructive aspect to it, but there is also a creative aspect. And that’s what we should try to embrace.

While the Australian government’s arguments against a net zero commitment include that protecting the resource sector should be a priority and that a shift to new energy sources would hurt regional Australia, Professor Holden says the place-based policies in place could protect communities during change.

“The best thing we can do is make sure we make this transition as smoothly as possible,” he says. “This means putting in place policies for cities and regional communities that are affected by the transition from coal and helping workers find new jobs and new industries.”

For workers in the coal industry in areas such as central Queensland and the Hunter Valley, this could be a way to ensure communities thrive with new life, instead of supporting a dying industry. , he adds.

“Many countries have had to deal with this before,” says Professor Holden. “For example, with industries like car manufacturing here in Australia.”

Another major commitment to be discussed at COP26 is that of climate finance: funding that supports actions to mitigate and adapt to climate change. In an Australian context, the country has stopped contributing to the UN Green Climate Fund and continues to fund the fossil fuel industry.

But as financiers around the world recognize that action on climate change is inevitable (and that markets will change to adapt to it), Professor Holden says supporting companies that don’t recognize it is a ” bad economic bet ”. This is a view shared by many, from the CEO of the world’s largest fund manager, BlackRock, to Australian Treasurer Josh Frydenberg. “Finance is global,” says Professor Holden. “The reality is that if we are to have access to global financial markets – and as a capital thirsty country Australia benefits tremendously – then we need to show what we can do in terms of a commitment to decarbonize our economy. ”

“And the treasurer was right to point out that if we fail to do so, the international financial markets will ensure that we pay more for our credit cards, more for our mortgages, more for our small business, and so on. And that will have a very real effect on Australia.

Besides the new technologies that would emerge in the transition to a green economy, there are other opportunities for economic growth when it comes to implementing an Emissions Trading System, which should be discussed at the COP26.

A market-based solution, such as an international trading system, which has long been a politically controversial issue in Australia, would provide an economic opportunity, says Professor Holden.

“Economists have been saying since the early 1900s that when you have a negative externality, the way to deal with it is to internalize it through the price mechanism,” he says.

“Having a market-based solution that provides opportunities for producers and adopters of green technologies in Australia provides markets for our ingenuity, ideas and renewable energy. As we speak, we are already seeing cables being built between Darwin and Indonesia and Singapore as a way to export green energy.

See also: Liquid metal has proven to be a cheap and efficient CO2 converter

In terms of the costs of adapting and mitigating climate change, Professor Holden says it will depend on the exact technologies needed and how they evolve. But he cautions that while it can be costly, not trying to do so will cost even more. 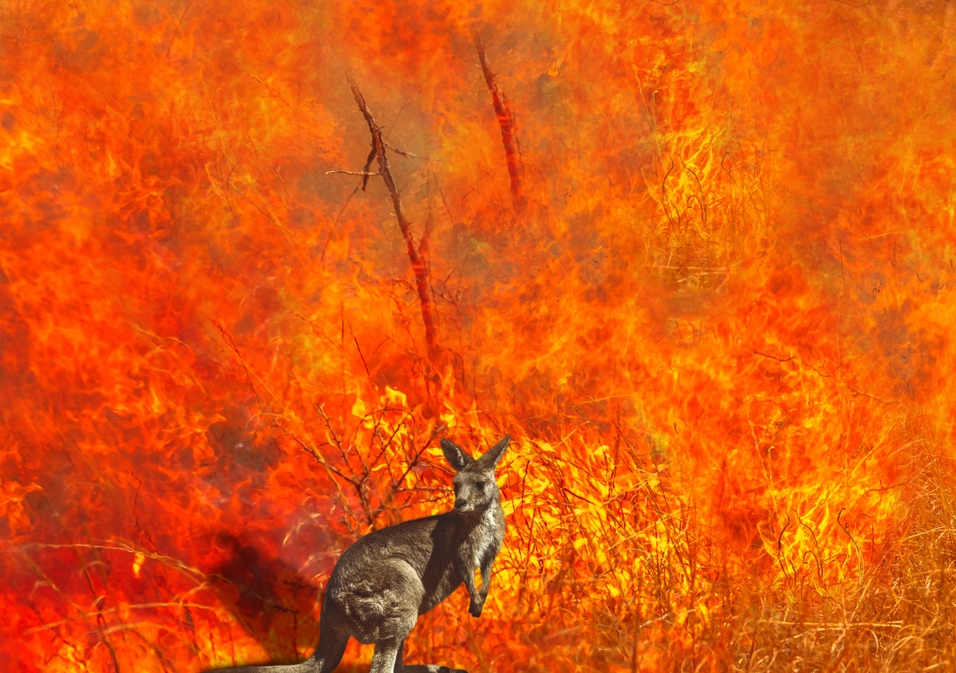 The 2019/20 Australian bushfires were a devastating reminder of the destruction that can come from climate change. Photo: Shutterstock

“The cost of not adapting is going to be an order of magnitude greater than the cost of doing so,” he says. “And we are fortunate to have a great technological capacity in terms of these adaptations. ”

“We have already seen droughts in Australia and bushfires just before COVID hit. Extreme weather events are more and more frequent and Australia is not immune. So we will have to do more, and we should be doing more to tackle climate change. ”