The inventory of existing real estate ads continues to be insufficient

S&P Dow Jones Indices (S&P DJI) has released the latest results for the S&P CoreLogic Case-Shiller Indices for August 2021, showing that home prices continue to rise across the country. Before seasonal adjustment, the U.S. national index posted a 1.2% month-over-month increase in August, while the 10-city and 20-city composite indexes both posted increases of 0.8% and 0.9%, respectively.

The S&P CoreLogic Case-Shiller US National Home Price NSA Index, covering all nine US census divisions, posted an annual gain of 19.8% in August, remaining unchanged from the previous month. The annual increase made up of 10 cities was 18.6%, up from 19.2% in the previous month. The 20-City Composite posted a 19.7% year-over-year gain, down from 20.0% the month before.

“The US real estate market has shown continued strength in August 2021,” said Craig J. Lazzara, Managing Director and Global Head of Index Investment Strategy at S&P DJI. “Each of our urban and composite indexes is at its highest historical level, and year-over-year price growth continues to be very strong, although moderating somewhat from market levels. last month.” 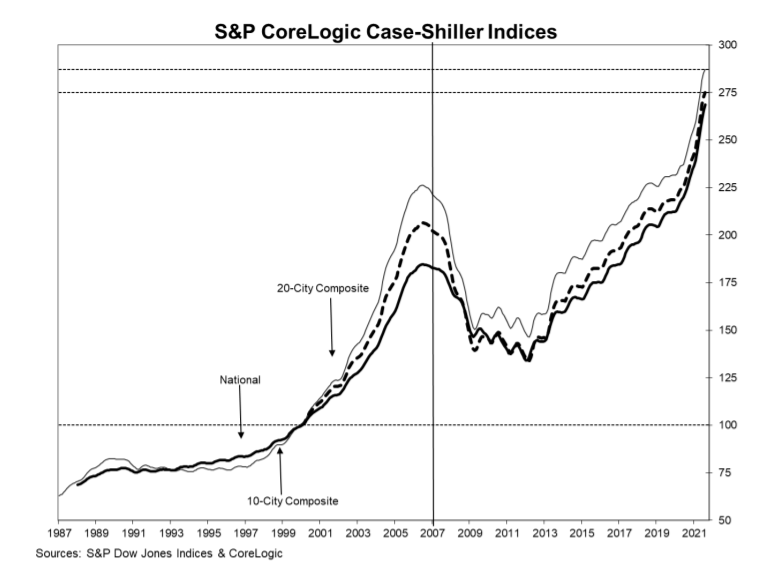 “We previously suggested that the strength of the US real estate market was in part due to a response to the COVID pandemic, as potential buyers move from urban apartments to suburban homes,” Lazzara said. “More data will be needed to understand whether this increase in demand represents an acceleration in purchases that would have occurred in the next few years anyway, or reflects a secular shift in location preferences. Data for August is consistent with either explanation. Data for August also suggests that house price growth, while still very strong, may start to slow. “

Phoenix, Arizona; San Diego, California; and Tampa, Florida had the highest year-over-year gains among the 20 cities in August 2021. Phoenix led the way with a 33.3% year-over-year price increase. the other, followed by San Diego with an increase of 26.2% and Tampa with an increase of 25.9%. Eight of the 20 cities reported higher price increases in the year ending August 2021 compared to the year ending July 2021.

“Going forward, the conditions buyers face depend primarily on two things: mortgage rates and housing supply,” said the chief economist of Realtor.com. Danielle Hale. “The average mortgage rate on a 30-year fixed-rate loan increased 10 basis points, from 2.77% to 2.87% in August, and passed 3.0% with no sign of slowing down since then, limiting the ability of some buyers to drive up home prices. Additionally, the availability of homes for sale remains low as new construction emerges from a decade-long deficit and the inventory of existing home listings continues to be below 2020 levels. found that the trends of new sellers were lagging behind the levels of the previous year, but the deficit is narrowing. While existing homeowners are reluctant to enter a housing market that has tilted so far in favor of sellers, more homes for sale are likely exactly what buyers and, ironically, sellers need.

Lack of building materials, which are at record highs in some cases, is contributing to the shortage of inventory of existing home listings, as Hale noted. Lumber prices hit a record high of over $ 1,500 per thousand board feet in mid-May, according to random lengths. The previous record before prices began to climb at the start of the pandemic in April 2020 was just below $ 600 per thousand board feet.

Earlier this month, the The National Association of Home Builders (NAHB) sent a letter to President Joe Biden seek help in dealing with fluctuations in wood prices and disruptions in the material supply chain. In the letter, the NAHB called on the Biden administration to take three main initiatives:

“Housing demand remains strong and residential construction is expected to remain at its current rate through 2023,” said NAHB Chairman John C. Fowke. in the letter. “For these reasons, the NAHB remains committed to doing its part to ensure that housing remains a key component of America’s socio-economic opportunities, creating jobs and ensuring that the U.S. economy continues to move forward. However, we cannot do this without your help on the lingering lumber and supply chain crises. “

Today, the US Census Bureau and the US Department of Housing and Urban Development (HUD) jointly announced their new residential sales statistics for September 2021, as sales of new single-family homes were at a seasonally adjusted annual rate of 800,000, 14% above the revised August rate of 702,000 and 17.6% below the September 2020 estimate of 971,000. 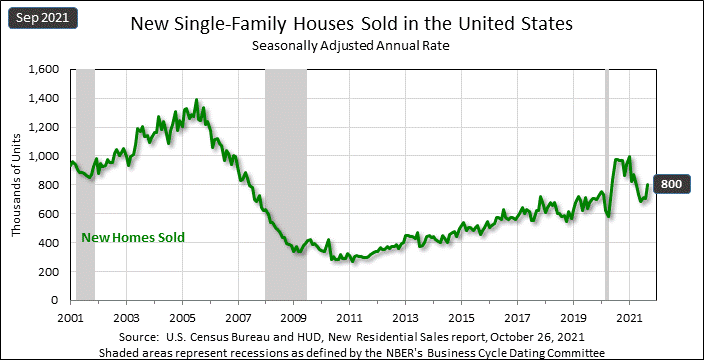 In terms of housing stock, the seasonally adjusted estimate of new homes for sale at the end of September 2021 was 379,000, or an offer of 5.7 months at the current rate of sales.

“Taken as a whole, the report continues to reflect the continuing story of strong housing demand in the face of a tight supply of homes available for sale, as home builders struggle to manage their order books.” , commented Doug Duncan, Chief Economist at Fannie Mae. “While the number of homes sold that were completed rose 32.7% at the highest rate since March, total sales were significantly bolstered by a jump in the share of homes sold that had not yet started. . At 32.9%, this is the highest rate since May. The good news is that despite the jump in sales, the total number of homes for sale at the end of the month remained stable at the highest level since 2008, suggesting that home builders are finding enough land to generate a faster pace of sales. high in the future. However, continued supply chain disruptions and labor shortages are limiting the pace of construction completions. Given the continued shortage of existing homes for sale, on a quarterly basis, we expect new home sales to increase in the first half of next year, as per our latest forecast, but the increase will be limited by the rate at which home builders are making progress in working on their arrears.

3 things to do before the imminent ...